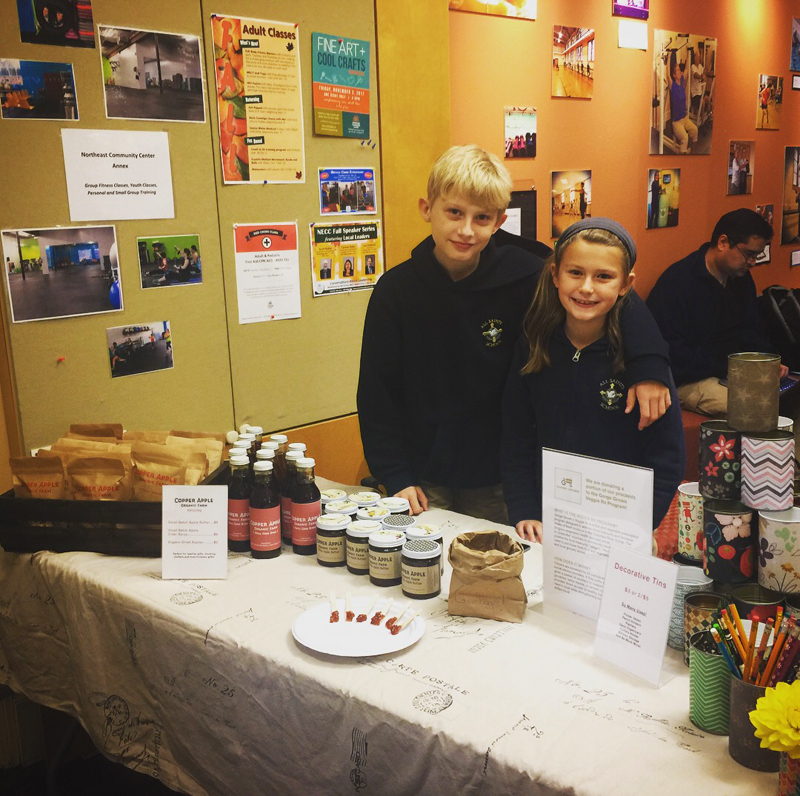 For the past month these two entrepreneurs have been busy picking, washing, peeling, pressing, cooking, drying, bottling, packaging and now they’re open for business! Our Small Batch Apple Butter, Apple Cider Syrup and Dried Apples will be available at a handful of holiday art and craft shows in the Portland area as well as in our online shop while supplies last (local delivery only available in the Portland area).

The apple harvest bag we bought this year made picking much easier. After filling the bag we gently open the bottom and the apples roll into the bin minimizing bruising. The harvest took place in early October but there was still plenty of good fruit left after the pickers were finished (This photo was taken before they harvested the trees 🙂 ) 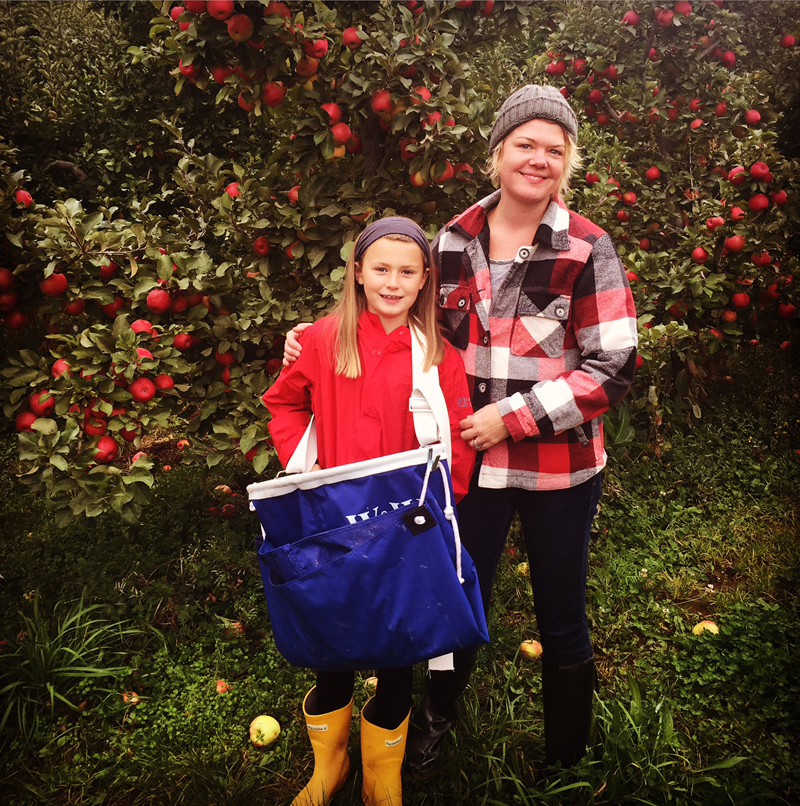 Carson headed up the washing part as Hadley claimed the water was just too cold for her hands (she gets that from me). 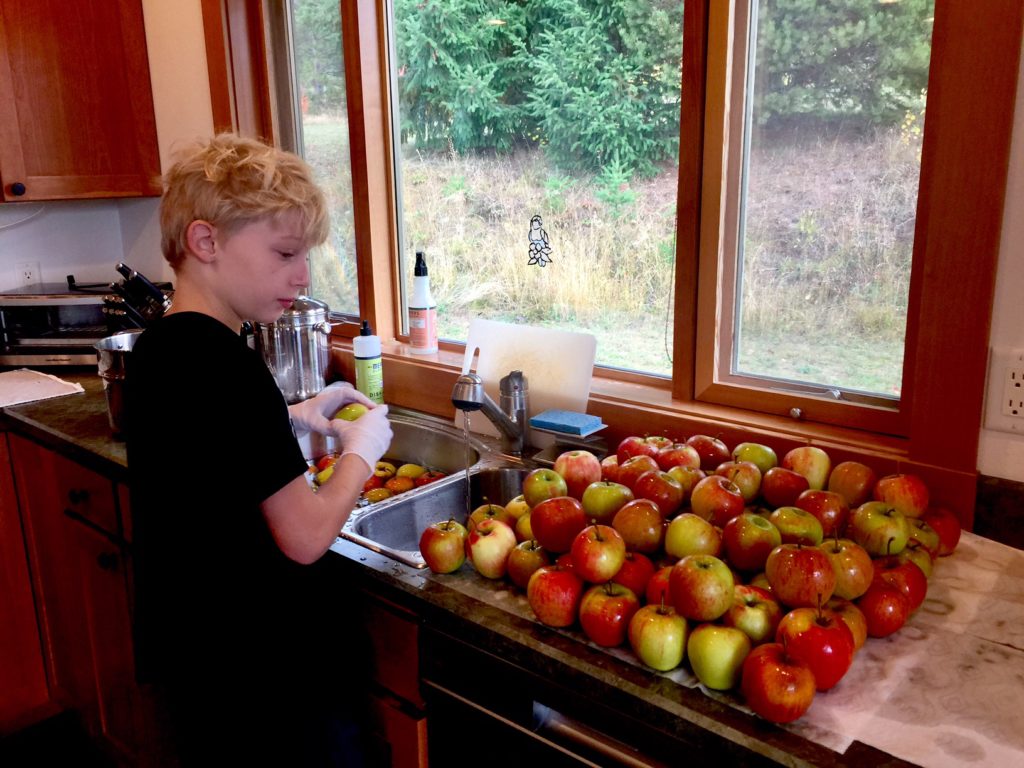 For the syrup we start with fresh pressed cider. We cut the apples in fourths then grind them down, cores and all before pressing out the juice. 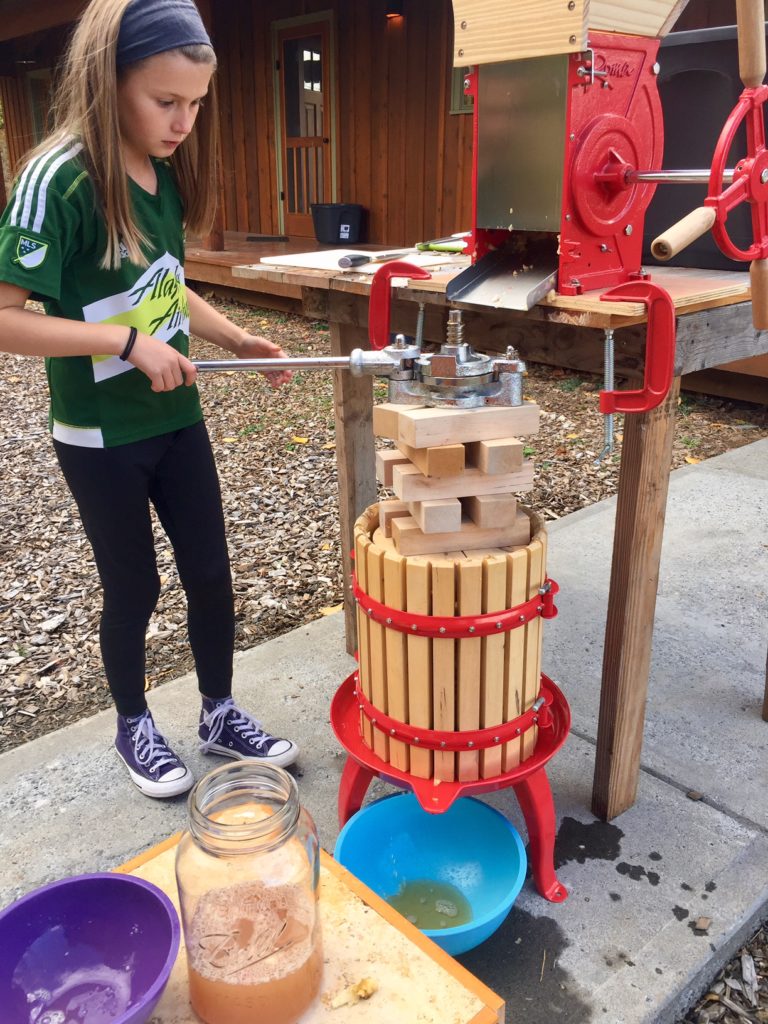 For the apple butter and dried apples we found this amazing apple slicer/corer/peeler we discovered on Amazon. After some initial trial and error we figured out the best technique. It slices, peels and cores the apples in seconds! 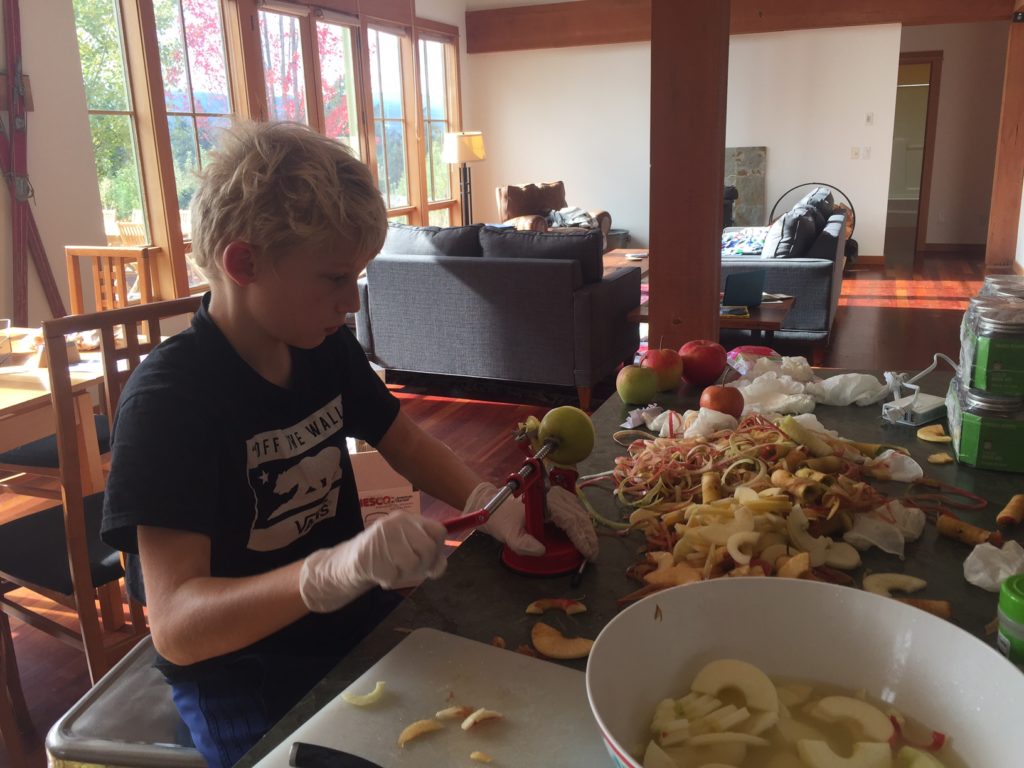 We made a few batches of apple butter on the stove but in the end we found the best (and easiest) technique was in a crockpot. After a batch is ready they sterilize the jars, carefully fill and seal with a boiling water bath. This pic was taken before we invested in an industrial-sized stock pot 🙂 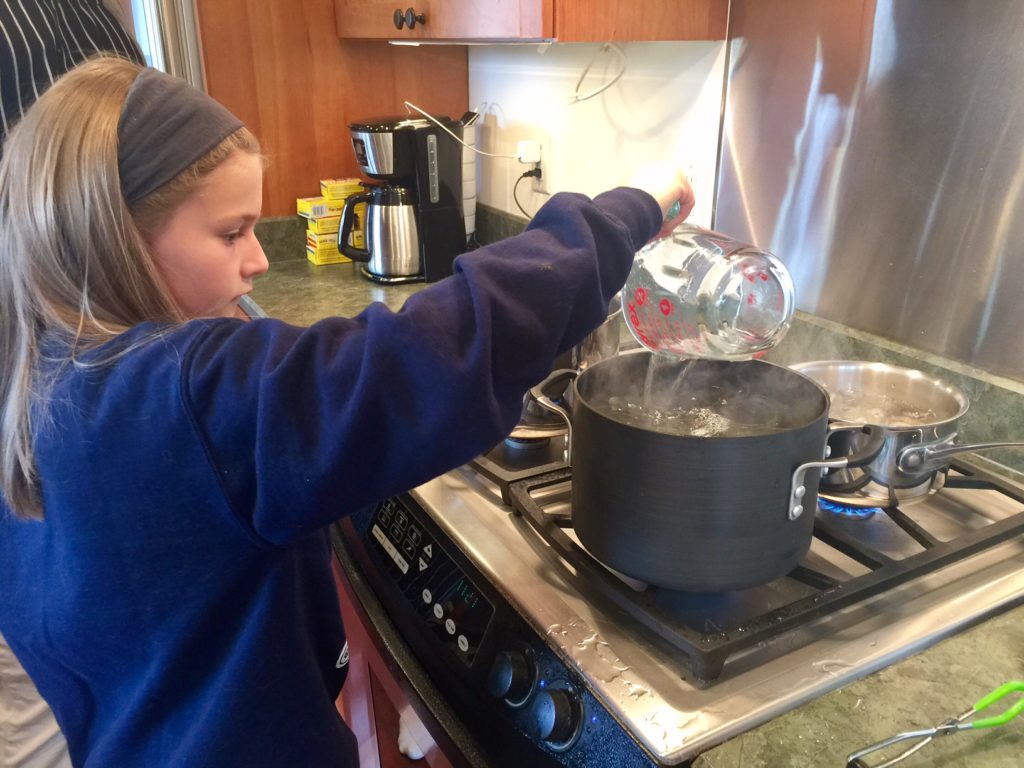 I’ll admit I had fun helping them with this part of the process. Early on we used Ball mason jars but without a smooth glass surface the labels had trouble sticking. I did some research and found a local bottling company that offered the perfect sized containers. 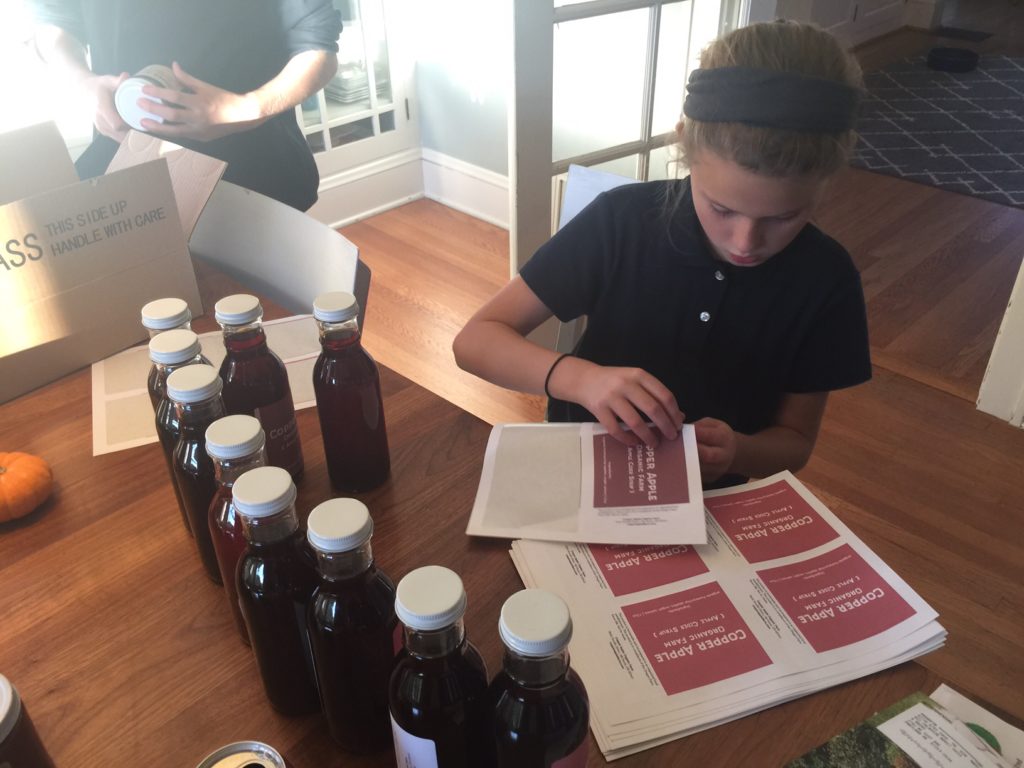 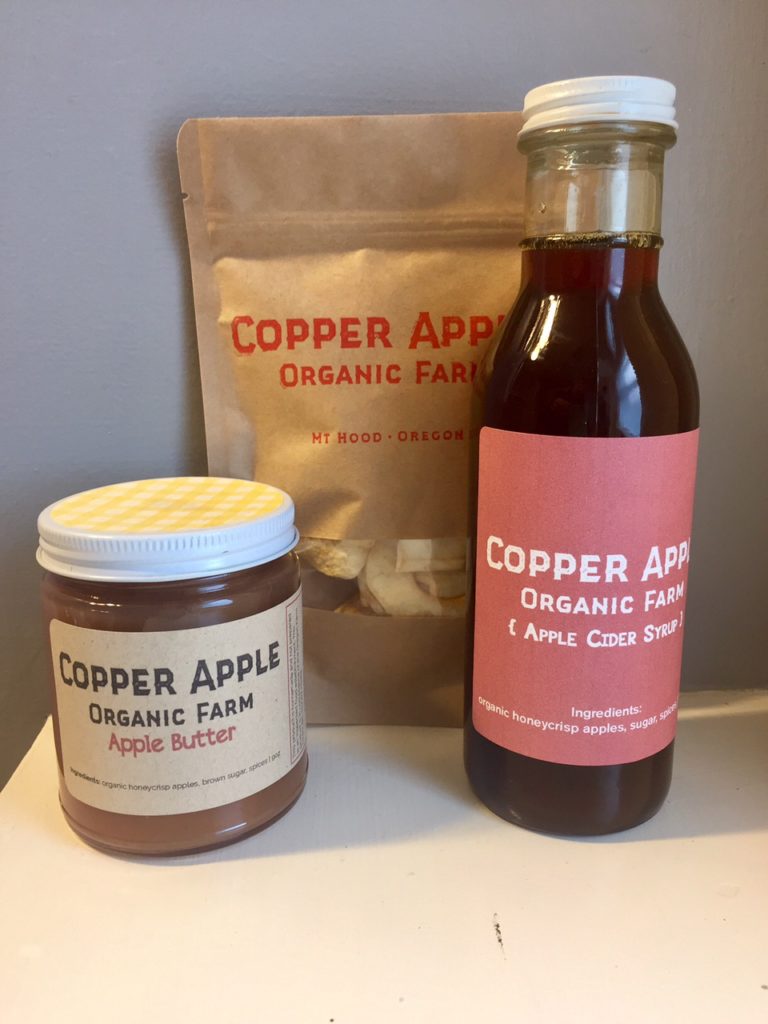 While Carson and Hadley are excited about making some extra money of their own, they wanted part of the proceeds to go to a charity. After discussing as a family the Veggie Rx Program seemed the obvious choice.  We discovered this nonprofit last year through our Harvestfest fundraiser at the farm: